“Whoever wishes to come after me must deny himself, take up his cross, and follow me”
(Matthew 16:24).

Finishing some thoughts on the Lenten Trifecta of Prayer, Fasting, and Almsgiving. Our last practice is Almsgiving. On the surface, almsgiving seems the same as tithing, contributing, or supporting the poor. Certainly, there are similarities – primarily the parting with some tangible good for the sake of another.

To contrast Almsgiving, it might first be good to remember what our basic “Sunday Offering” implies. As Catholic Christians, we have a moral obligation and requirement “to provide for the needs of the Church, each according to their own ability” (CCC 2043). This is one of the Precepts of the Church. This is the idea of a personal, intentional, sacrificial, first fruits offering to God’s Church to enable it to continue its Saving Mission of proclaiming the Gospel, providing the Sacraments, and serving others. This giving is not based upon what the Church might need – i.e., “to keep the lights on” (although sadly this is how it is often pitched), but rather based upon what one has received from God. It is a true response in faith of the disciple to God’s Grace and trust in God’s continued care in the future. This implies more than a mere ‘tip’ to the Church from whatever happens to be left over at the end of the week or month. It should be "according to their ability", meaning in proportion (percentage) to the blessings received from God from the start. To be honest, most studies suggest Catholics have "more means and give less" than most of our Protestant sisters and brothers. We Catholics tend to have a "pay the bills" mindset versus a “Glorifying God with Gratitude” mindset. Which of those two sounds more holy? Hmmmm. That said, because there are more Catholics than Protestants, the Catholic Church still provides more charitable services throughout the world. 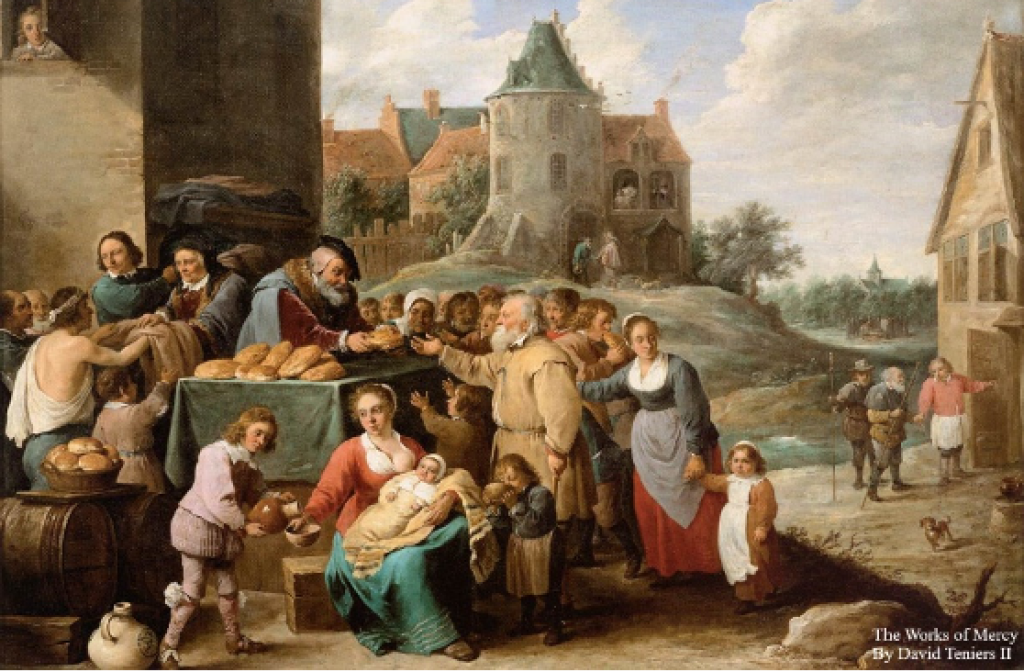 So, what is Almsgiving, and how is it different than our ‘Sunday Offering’? First, Almsgiving is above and beyond the first fruits, morally-required, giving. Almsgiving is not the same as ongoing sustained giving or response in Faith to support the Church and Mission to serve others. Per the Catechism, Almsgiving is “money or goods given to the poor as an act of [1] penance or [2] fraternal charity” (CCC Glossary). Giving alms is a tangible way to make up for sin. Now, almsgiving is not the buying of forgiveness. It is a recognition, as all penances, that one’s personal sins and contribution to social sins have tangible and temporal consequences in the community. And while it is often impossible to make full amends or restitution for the negative effects of sinfulness, one is morally encouraged to make an effort. Giving Alms to the less fortunate, who Scripturally and Traditionally hold a special place for God in the world by virtue of their need, is a way to contribute toward that restoration. Almsgiving is not just a penance, however. It is also a movement of the heart toward the universal fraternity between all peoples. In each person we encounter, we are to see a beloved son or daughter of God. As such, when they are in need, we are challenged by the Gospel to attend to that need as if it were our own. Almsgiving is a way to strengthen unity through solidarity. The Scriptures support this:

“Whoever cares for the poor lends to the Lord, who will pay back the sum in full” (Proverbs 19:17)

“Prayer with fasting is good. Almsgiving with righteousness is better than wealth with wickedness. It is better to give alms than to store up gold, for almsgiving saves from death, and purges all sin. Those who give alms will enjoy a full life, but those who commit sin and do evil are their own worst enemies.” (Tobit 12:8-10)

All three – Prayer, Fasting, Almsgiving – must be an integral part of our Lenten Journey to Mount Calvary. For all three encourage, enable, and empower us, by God’s Grace received, to ‘take up our Cross & follow Him’.

Holy Family, Protected and Led by St Joseph, Pray for us.