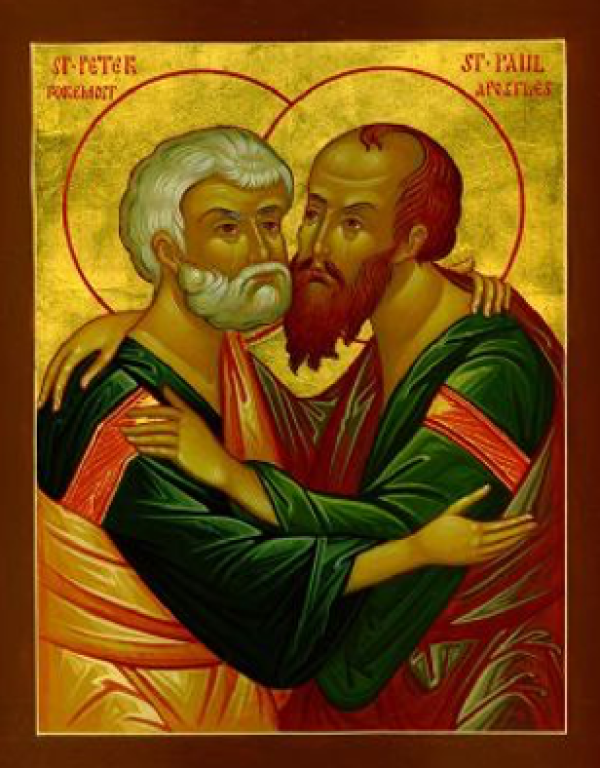 The Solemnity of Saints Peter and Paul was celebrated by the Church on June 29. These two pillars of the Catholic Christian Church and Faith are always celebrated together. Pope Francis’ homily for that day has two themes that are very pressing for out times: Unity and Prophecy. I was moved and challenged by the Holy Father’s insights and thought they would be worth bringing to the attention of all of us. The first excerpt is on Unity:

“We celebrate together two very different individuals: Peter, a fisherman who spent his days amid boats and nets, and Paul, a learned Pharisee who taught in synagogues. When they went forth on mission, Peter spoke to Jews, and Paul to pagans. And when their paths crossed, they could argue heatedly, as Paul is unashamed to admit in one of his letters (cf. Gal 2:11). In short, they were two very different people, yet they saw one another as brothers, as happens in close-knit families where there may be frequent arguments but unfailing love. Yet the closeness that joined Peter and Paul did not come from natural inclinations, but from the Lord. He did not command us to like one another, but to love one another. He is the one who unites us, without making us all alike. He unites us in our differences.

Today’s first reading brings us to the source of this unity (Acts 12:1-11). It relates how the newly born Church was experiencing a moment of crisis: Herod was furious, a violent persecution had broken out, and the Apostle James had been killed. And now Peter had been arrested. The community seemed headless, everyone fearing for his life. Yet at that tragic moment no one ran away, no one thought about saving his own skin, no one abandoned the others, but all joined in prayer. From prayer they drew strength, from prayer came a unity more powerful than any threat. The text says that, “while Peter was kept in prison, the Church prayed fervently to God for him” (Acts 12:5). Unity is the fruit of prayer, for prayer allows the Holy Spirit to intervene, opening our hearts to hope, shortening distances and holding us together at times of difficulty.

Let us notice something else: at that dramatic moment, no one complained about Herod’s evil and his persecution. No one abused Herod – and we are so accustomed to abuse those who are in charge. It is pointless, even tedious, for Christians to waste their time complaining about the world, about society, about everything that is not right. Complaints change nothing. Let us remember that complaining is the second door that closes us off from the Holy Spirit, as I said on Pentecost Sunday. The first is narcissism, the second discouragement, the third pessimism. Narcissism makes you look at yourself constantly in a mirror; discouragement leads to complaining and pessimism to thinking everything is dark and bleak. These three attitudes close the door to the Holy Spirit. Those Christians did not cast blame; rather, they prayed. In that community, no one said: “If Peter had been more careful, we would not be in this situation”. No one. Humanly speaking, there were reasons to criticize Peter, but no one criticized him. They did not complain about Peter; they prayed for him. They did not talk about Peter behind his back; they talked to God. We today can ask: “Are we protecting our unity, our unity in the Church, with prayer? Are we praying for one another?” What would happen if we prayed more and complained less, if we had a more tranquil tongue? The same thing that happened to Peter in prison: now as then, so many closed doors would be opened, so many chains that bind would be broken. We would be amazed… Saint Paul urged Christians to pray for everyone, especially those who govern (cf. 1 Tim 2:1-3). “But this governor is…”, and there are many adjectives…. Let God judge them; let us pray for those who govern! Let us pray: for they need prayer. This is a task that the Lord has entrusted to us. Are we carrying it out? Or do we simply talk, abuse and do nothing? God expects that when we pray we will also be mindful of those who do not think as we do, those who have slammed the door in our face, those whom we find it hard to forgive. Only prayer unlocks chains, as it did for Peter; only prayer paves the way to unity.”